The Textile Area – by Jason & Alex 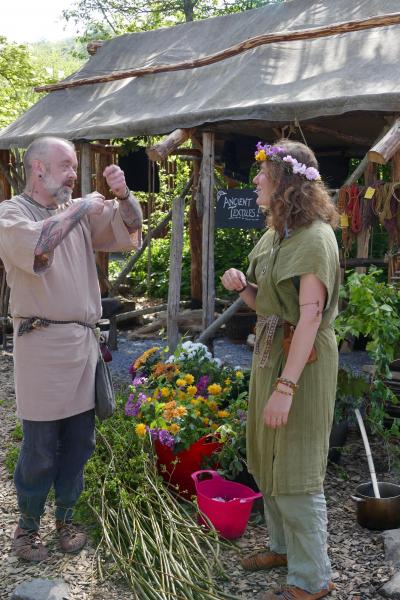 Jason and Alexandra, our Iron Age experts from the textile area, tell us about their experimental archaeology textile journey in 2018.

2018 was a busy and exciting year in the textile area of the Crannog Centre.  As our research is self-directed, we are free to pursue experimental archaeology which links directly to our collection.  The two main objects we used as a springboard for research are the spindle-whorls and the beautifully preserved piece of Iron Age fabric, all found at the Oakbank Crannog excavation.  Our method of working this year has been to try to discover the nature and methodology of working with wool and various plant fibres – so we spent the earlier part of the season sorting fleeces and preparing them for the dyeing process.  Using plants that are native to Scotland, we dyed multiple amounts of wool with varying degrees of success.  During the summer we met Jon and Sarah Mac who inspired us by showing us the process of lichen dyeing.  Using such a method gives rich tones of pink through to deep purple and really challenges the idea that Iron Age clothes were dull.  Lichen was found at Oakbank which warrants further research over the coming year.

We are very ‘hands-on’ at the Crannog Centre and like our visitors to try Iron Age techniques.  We seem to have mastered the art of drop-spinning and have even created our own stone drop-spindles using quartz to drill through the stones.  Many of our visitors were able to have a go at mastering this ancient art, and as a result, we now have a growing amount of spun wool, which will enable us to eventually weave it into an Iron Age tunic from an authentic pattern.  This will be a large collaborative dyeing, spinning and weaving project undertaken by the textile area and we estimate so far that 2500 visitors are involved.

We like to show how a wide range of plants (over 200 were found at Oakbank) was used to create clothing and colour.  We have nettle-spun garments and have also been spinning flax to show the wide range of skills and knowledge held by our Crannog ancestors.  Over the year, our interest expanded into a wider Iron Age context both in Britain and the European mainland and we recreated a tablet woven piece from the Salzberg prehistoric cemetery near Hallstatt, among other tablet-woven pieces.  We are also going to recreate a warp-weighted loom from the same period.

As the original Crannog dwellers made connections with people locally and from further afield, so do the modern Crannog people who work on site.  We have made many valuable friends and allies over the last year, learning and sharing skills; and we look forward to deepening connections with them over the coming years.  At the beginning of this year’s season, as part of the development of the textile area, we will be planting a dyer’s garden and using the plants during the year.  There are other major projects, details of which to be revealed in due course.