The last snow of spring – A love story! 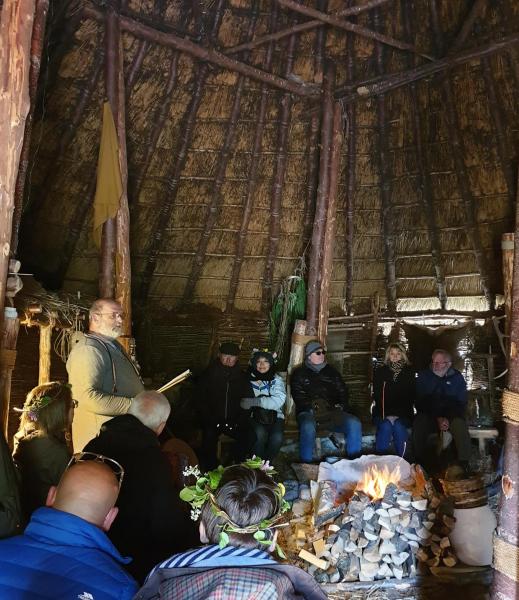 Following the success of last year’s handfasting ceremonies, we decided to do it again this year but over 2 days this time. We didn’t really know what to expect but it turned out to be an amazing day as Graham Liney, our Iron Age Interpreter and Celebrant explains:

Easterly winds, fresh snow on the hills and the coldest May bank holiday on record couldn’t dampen the warmth of love and affection around the crannog during our handfasting vow renewal ceremonies over the first weekend of May.

Last year we held handfastings in an impromptu celebration of the royal wedding between Harry and Meghan, giving couples the chance to renew their vows in a simple handfasting ceremony.  Handfasting is an ancient tradition of engagement and is possibly where the expression ‘tying the knot’ comes from.  During last year’s event, we helped 25 couples renew their vows.

This year, we decided to hold a similar event based around the Celtic festival of Beltane.  The time of year when spring has sprung, fertility is all around and thoughts of love are in the air.  We had no idea how successful the event would be but we soon found out when 70 couples joined us to renew their vows over the 2 days!  Some had planned to join us, travelling great distances and dressing for the occasion while others decided to participate when they learned about the event on arrival at the centre.

Each ceremony consisted of the couples being ‘drummed’ into the crannog and listening to a few simple words based around the trees of the crannog and our resident swallows.  Their hands were ‘handfasted’ together to the sound of a harp being played by our young volunteer, William Kent.  The ceremonies were completed with a traditional Celtic blessing.

We were amazed during one ceremony when the 3 couples who had declared their intention to renew their vows were spontaneously joined by the 17 other couples who were originally in the crannog to watch!

Following the formalities in the crannog roundhouse, all couples followed the sound of the drum through the site after first jumping the broom and passing through a purifying fire before proceeding down onto the beach where the Beltane fire was lit, receive their certificates and enjoy a slice of celebratory cake & a drink together.

Although the ceremonies were charged with emotion, it was some of the stories shared on the beach that were at the heart of the occasion: the couple who had eloped 64 years ago and had their first ever wedding photo taken at the event; the couple renewing their vows in front of their 2 children who, despite facing tremendous health challenges, emanated love and joy and the couple who visited last year and told us how the impact of that visit had led them to return to renew their wedding vows at this year’s event.

Everyone had a story to tell, some happy, some sad and the sight of people who had never met before sharing these stories is something I will never forget.

In an age of cynicism and capitalism, a simple story can have an incredible power that money cannot buy and sharing that story has an amazingly profound effect!