The Celtic Tradition of Handfasting 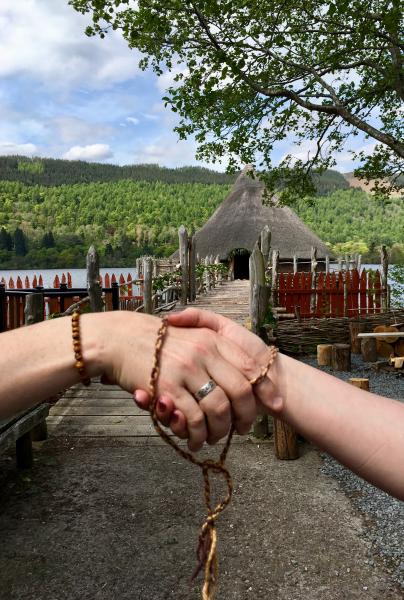 ‘Taking each other’s hand in marriage’ is a well-known phrase but have you ever stopped to think about where it comes from? Handfasting is probably the answer …

Marriage is always a hot topic as the summer months approach but this year it has been difficult to avoid with a high-profile wedding featuring just about everywhere.

Getting married is a big thing with many wedding venues fully booked up to 2 years in advance.  Perhaps this, together with the escalating costs involved, is the reason why the practice of Handfasting is becoming more and more popular.

Put very simply, Handfasting is the practice of couples committing to each other by having their hands tied together with braid, or something similar, and exchanging rings and vows in a traditional non-religious ceremony. Knots are often tied in the braid at the making of each vow.  When the Handfasting is over and the braids are removed, the couple are left with a keepsake which can be used for future vow renewals or just a reminder of a very special day.

This form of committment generally lasted for a year and a day after which the couples could renew their vows for a further year and a day, marry or separate – depending on how well the year went!

It is widely believed that the custom of Handfasting was first practised by the ancient Celts so it made sense that the Scottish Crannog Centre should hold very special Handfasting Renewal of Vows ceremonies in the Crannog itself.

Couples visiting the museum on 19th May were able to renew their vows to each other in Handfasting Ceremonies held throughout the day and officiated over by Graham Liney, one of the Iron Age Interpreters at the museum.

The site was decorated with foliage and participating couples wore floral crowns made from flowers which were kindly donated by our friends at Coach House Flower in Grandtully.  Some Handfasting braids were made by the museum staff and volunteers, others were made by the couples themselves. The Crannog was and is the perfect venue to continue this very special Celtic tradition.

Couples can also marry in a handfasting ceremony which is legal in Scotland providing the celebrant is authorised by the Registrar General, but not in the rest of the UK.

If anyone is interested in renewing vows or holding a handfasting ceremony at the Crannog, please get in touch with us for further information.