The Bridge Project – A story that connects communities 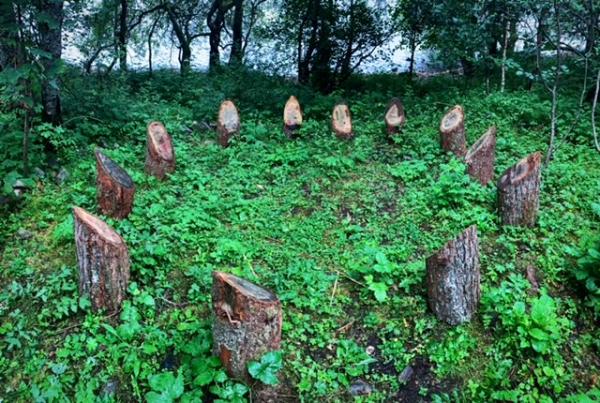 The culmination of the Bridge Project was a co-authored story and a co-curated piece of art with Kenmore School. Here is the story of how the project unfolded.

In April 2020 the bridge project was first discussed and eventually it started in January 2021. This was with the aid of funding from Historic Environment Scotland for the Year of Coast and Water. So in the depths of winter, the Crannog maintenance crew started work on the repairs to the bridge. The actual preparation for this had started in November the previous year when all the wood was delivered and placed around the site in readiness for the repairs. This wood was debarked and made ready for future work.

So as soon as the snow and the storms started the work began. This of course would be in direct contrast to the community of 2500 years ago who would have carried out any repairs needed in the height of summer when the weather would be at its best and the repairs could be done as quickly as possible. The methods used were pretty much traditional or as much as was possible. Even although the conditions were less than ideal this part of the project was finished on schedule. Click here to watch a video about the repairs.

The next part of the project was to prove slightly more problematic as we all went into lockdown again and as we needed input from the local school we had to put everything on hold until the spring. We were tasked with creating a story and a piece of art that reflected the bridge-building 2500 years ago. This had been planned to take place in January but finally happened in May and June. Jason our resident artist and Graham the Crannog storyteller met up with pupils from the local school over zoom to start putting the story and the art together.

We put together 3 online sessions.

!) We introduced the concept of the story based around the bridge repair and the importance of communities working together in times of need. The children had an opportunity to chat with 2 of the current bridge-builders and look at the similarities and differences.. We shared images of a graphic novel the children and Graham had worked on previously and we started to talk about how we might develop the new story,

2) We started to develop the story by creating characters based on our strengths, characteristics, and abilities. We worked out which roles we would have had in the Crannog community, how would we have been able to help in a time of need and how would your character be similar 2500 years later. This provided an opportunity to go back in time and imagine how life would have been for you then. We then put together the bare bones of the story to be fleshed out.

3) The third session was done face-to-face and involved the children hearing their story for the first time. You can see the story being told here.

We wanted to create a piece of environmentally zero-impact artwork that, over time, would be absorbed into the surrounding environment, so we used twelve oak tree stumps cut at an angle and set in a circle. The children came to the museum and after hearing the story, drew illustrations from the story onto the stumps; it tells the story as you walk clockwise around the circle. For the illustrations the children used moss graffiti – this is made by mixing moss with buttermilk and sugar and painting it onto the stumps. Although not immediately visible, the moss will grow in the shape of the different illustrations over the period of the coming year. When we move to Dalerb we can take the artwork with us which will form part of our storytelling area. Over time the artwork will be absorbed back into the land.  Our eco-artwork tells the story of a particular place at a particular time. 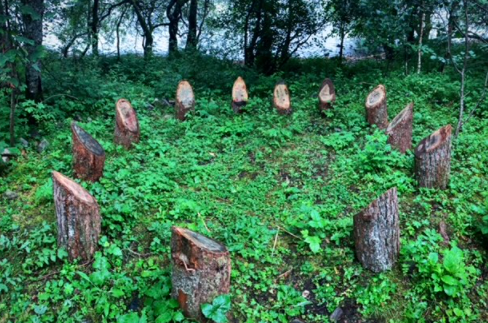 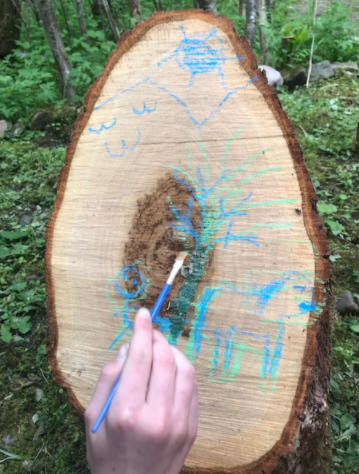 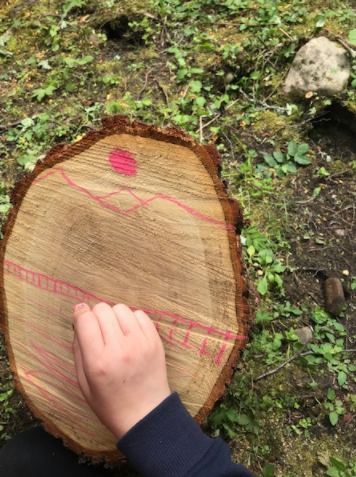 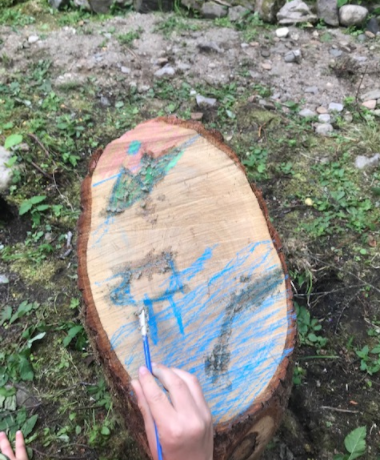 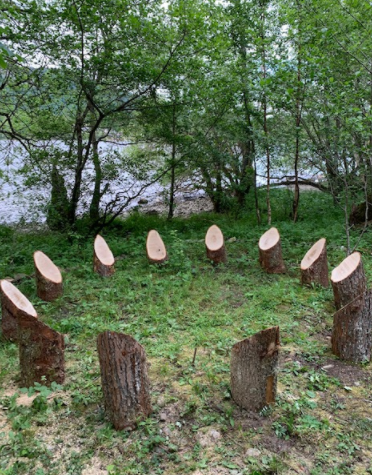