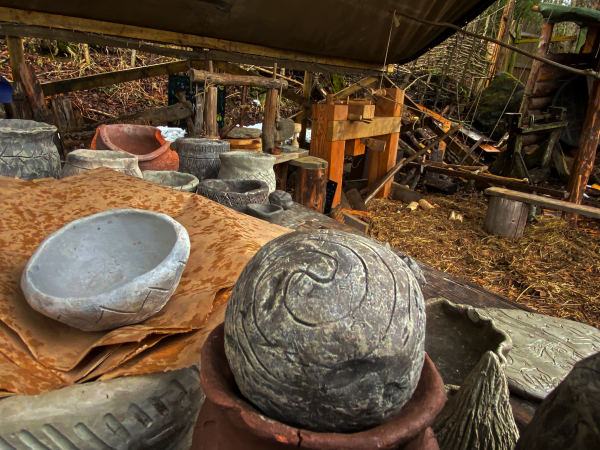 I first came to the crannog centre in summer 2018, a sharp contrast to the aftermath of storm Dudley which howls outside as I type this. I met a lot of friendly staff and hardworking volunteers who put their time and effort into building a unique centre to explore the lives and skills of Iron Age Scotland. The site was centred around a reconstruction of a crannog, a type of water-dwelling whose preserved remains have been found throughout Scotland. I myself agreed to give up my Sundays and help out once a week, and over the next two years, I helped to organise their collection of books. It was transformed from a mish-mash stack of books lying in a forlorn corner of the staff room to a catalogued and sorted library in the museum. As part of this, I learned how to apply the Dewey decimal system and gained some experience in database management.

Thanks partially to my experiences at the Scottish Crannog Centre I am now almost halfway through studying for a degree in Heritage and Tourism with the University of Stirling. As part of my course, I was required to take a work placement, and where better place to be than the Crannog centre. Although some things have changed since I was last here, the absence of the crannog itself being the most unfortunate, many things remain constant. The great enthusiasm and passion of the crannog community endure despite the loss and it has been a pleasure to be back here, even for just a week.

I have been helping out in different areas than during my original volunteering. My main task during my week back at the crannog has been learning to do a talk on technology for tour groups. This has involved listening to what the people who regularly do it say and including some of my own ideas. For some people this would be an easy job but speaking in front of large crowds has never been a strength of mine, especially when you are the focus of that crowds attention. It has also been interesting to learn more about different areas of iron age life that I hadn’t paid much attention to during my original stint. Trying to use a drop spindle is not something I plan to repeat, however!

Hopefully, the Scottish Crannog Centre will move across the loch to a new site at Dalerb in just a few months and without too many unforeseen problems along the way. I always think of the crannog centre and the amazing team who make it possible fondly and I can’t wait to see the new crannogs, roundhouses and other iron age reconstructions spring up at Dalerb.