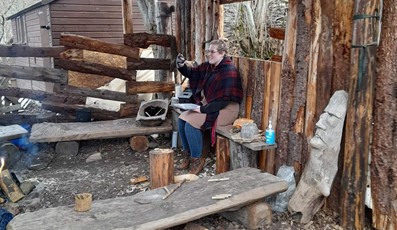 Hi everyone, it’s Erin again! I am an MSc Cultural Heritage student from at the University of Stirling and I have been working at the Crannog for roughly the last 8 weeks on an internship through Museum Galleries Scotland and EDI Scottish Heritage, funded by AHRC. While at the Crannog, I have been working with incorporating and connecting my Indigenous/Metis heritage with Iron Age Scotland. I finished up my internship with the Crannog last week and already feel a little lost without it and the amazing people. For this last blog post, I want to share my journey with at the Centre, the people I have met, and what the experience has meant to me.
So let’s start at the beginning! Back in 2021 (I have lost track of when exactly, time has gone by too fast), an internship opportunity was sent out and I was intrigued. I applied but didn’t get my hopes up. When I got the email inviting me to an interview, I was over the moon! Then a little while later I got the email…I was accepted for the placement at the Scottish Crannog Centre. To say a few tears of joy were shed would be an understatement. I was laughing and crying with pure happiness! Since moving to Scotland from Canada in September 2019, I had received countless rejection emails for dream jobs, internships, and projects. The Crannog was the first place that gave me a chance to enter the museum and heritage field within Scotland and I leap at the opportunity. Not only would I be working in my field, but I would be incorporating my culture that I was still working on connecting with. Absolute dream come true and I could not contain my inner fangirl!

My first week traveling up from Stirling was an absolute whirlwind of activity. I participated in training days and got to meet all the staff and volunteers. It was a lot all at once and I felt like I was jumping off the deep end without knowing how to swim. But I had nothing to worry about because everyone was so welcoming and by the time I actually stepped foot in the Centre, I already felt like I was a part of the team. The last three days of my first week were spent running around the site, getting used to everything, and talking to as many people as I could about what their passions and projects are. I shared pieces of my culture for the first time since moving to Scotland and man did it feel good! Everyone was so open to hearing what I had to share and that was refreshing. I found connections between Indigenous cultures and Iron Age Scotland in the form of traditions and practices. Throughout the whole week, I just felt like a kid in a candy store as I finally got to be surrounded by history once again and learn about what the Crannog was all about. The more I learned, the more excited I got as I realized that everything the Crannog stood for was what I imagined a museum should be. Inclusion, safety, passion, happiness, silliness, and family. I was really lucky to have a full week to explore and get used to the site before they opened for the year.

In the middle of February, I traveled up to the Crannog Centre for 2 separate events. I got to meet some of the UNESCO RILA (Refugee Integration through Language and Arts) group from Glasgow during another training day. The stories and experiences that were shared touched me and it is something I will carry with me for the rest of my life. So many people around the world are cut off from the cultures that they identify with for various different reasons and it was incredibly inspirational to hear how these people continue to connect with what is important to them and continue to share it with new people and communities as they go along. Sharing your culture and traditions with someone else or another community can be one of the greatest gifts in the world. It means that someone is letting you in and trusting you with what makes them who they are. Our world has forgotten these ancient ways of just sitting down, talking, and sharing with different people. These experiences are what will carry us forward and allow us to connect with people and communities we never thought possible. I shared how important ancestors and elders are in Indigenous communities; how they are the ones we go to for help and assistance and they are the ones that pass down our oral histories to new generations. In sharing that, I was able to connect and learn about how the same traditions are very much present in Ghana, halfway across the world.

Opening day was amazing to be a part of! I had created a simple activity that I would be delivering for the first time. I got to dress up in Iron Age clothes for the first time and spend the day by the fire. Because ancestors are such a central part for the Indigenous in North America, I created an activity surrounding them and the elements. The use of elements and belief in nature is integral to different Indigenous ways of life. In the activity, I had each visitor write down a message to someone they were thinking of, whether they were near or far, past or present, and then throw the messages into the flames and allow the smoke and fire to carry that message to that person wherever they may be. As opening day was Valentine’s Day, the messages on that day were of love. The activity has carried on since which means so much to me. After the activity was complete, I shared the legend of Hummingbird from the Haida whose lands are located on the west coast of Canada. A few years ago, my dad had carved a hummingbird using a Haida design and I brought it over when I moved. I shared the hummingbird as I told the legend of Hummingbird and the message of spring it carries each year. Being able to share a physical object of Indigenous culture was special, especially since it was something that was carved for me by my dad. 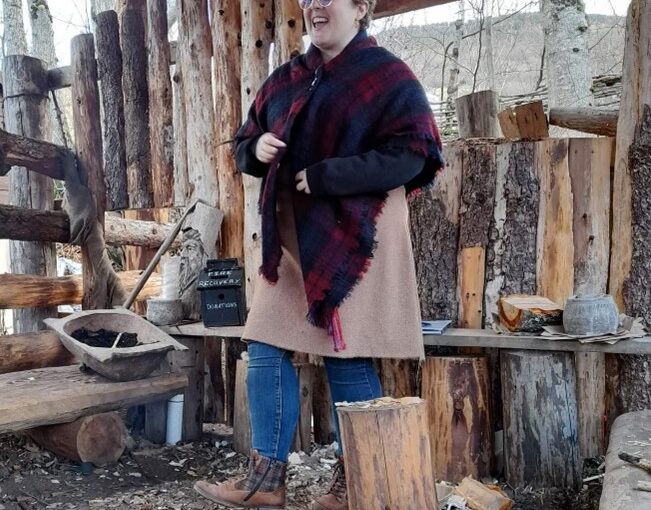 In my university reading week, I traveled back up to the Crannog for the last time. This time, it was a full week of being part of the daily chaos of the Crannog while it was open. Even though it was a quieter week visitor-wise, it felt amazing to be running around putting on my activity again, chatting with the staff about their projects, and helping out with workshops that were on. I learned how to make a thumb pot during a virtual workshop for GAMH and reverted back to feeling like a child playing with playdoh! Another day I learned more about the workshops the Crannog does with Women’s Aid Perth and RASAC. In one of the workshops, I shared what music and dance mean to my people and how it was taken away from us for years as European settlers tried to ‘assimilate the native out of us’ by outlawing our traditions and practices. There was Pancake Day and World Book Day during the week which brought new little activities to the tours. On my second last day, I sat down and recorded an episode for the new Crannog-Cast podcast (which you should totally check out on Spotify…hint hint) with the resident storyteller. We each shared a story, and I chose to share the creation legend about Turtle Island that comes from the Haudenosaunee people (my people). It is the legend of how North America was created on the back of a turtle. Having the opportunity to share this legend with a wider audience will be something I will forever be grateful for. It was the perfect way to end my 8 weeks at the Crannog.

Overall, my internship and time at the Centre has been one of the best things to happen to me. I got to see that museums are actually making important changes to work with people and connect with them. I was given an opportunity to share my culture with incredibly open-minded people which in turn, allowed me to connect further with my own culture. My experience at the Crannog will be one that will stick with me for a long time to come! I am sad I won’t be coming up again every few weeks, 8 weeks is such a short time. But hopefully one day I will be back to see what amazing work the Crannog continues to do!