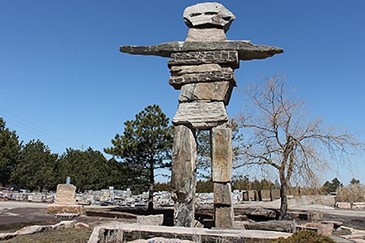 Erin writes about Inuckshusks and 2 spirit people, as part of her internship at the Crannog Centre.

Erin is spending 8 weeks with the museum as part of an equality, inclusivity, and diversity internship program through Museum Galleries Scotland, working with just 4 museums across the whole of Scotland. See her fabulous previous blog for her impressions of her first week on our blog page. This week she has been working on new interpretation for our museum activities and changing approaches to engaging with cultural heritage through her own viewpoint and identity as part of the Métis tribe with Scottish ancestry.

Erin: Our world gets stuck in one-view point and it’s important to know how other cultures approach daily life, relationships and connectivity. By helping guide others to safety or realizing ‘normal constructs’ haven’t always been normal, we can learn from each other and grow.

Inukshuks are giant piled stone structures made in the form of a human. They are a primarily Inuit custom but have been carried into other Indigenous cultures through trade and relationship networks that span across North America. Primarily they have been used as pathway markers so travellers know they are on the path while making their way across the arctic through snow and ice storms. They have also become a symbol of safety and comfort as those that come across them, know that they are getting closer to getting out of the storm. In the vast expanse of the arctic, it was very hard to travel during the winter months to be with others so these structures were a way to guide people to each other in an otherwise unforgivable landscape.

To connect this back to the Iron Age in Scotland, people would have lived farther away from each other in comparison to today. In winter months with the weather in the highlands, travelling to see one another would have been difficult as well. Humans have always found a way to connect with each other and travel despite the adversities they continually have to face. Path markers are part of many cultures across the world and are adapted to the environments that people live in.

Materials for a possible activity:

–        Rocks (preferably stackable with one longer flat one for the arms)

In many Indigenous cultures across Canada, they recognize a third gender. Someone who does not identify with either the male or female exclusively. These individuals would be accepted into the community and would play special roles that others would not. They could perform both female and male tasks within the community and can take positions in government to give the voice of both sides simultaneously. The idea of 2 Spirit people is one that has been around in different communities for centuries.

Connecting with Iron Age Scotland, the idea of this third gender fits in with questioning our inherent beliefs of what historic gender roles are. Like with the building of the Crannog, most people assume it was built by the men but evidence shows it was could most likely be the women who would build them. History has not always been stuck with the gender ideals that we hold now. In a time when everyone was needed to perform a task, would things have been so selective? Or were things a bit different from today?