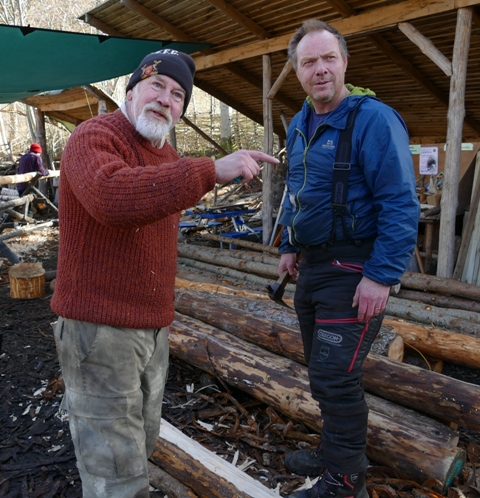 One of our volunteers was taken ill with a heart attack last week and the response from our emergency services was just amazing!

We all know just how invaluable the emergency services are but staff, and in particular one of our volunteers found out just how priceless they really are last week!

Our team of fantastic volunteers were rebuilding an Iron Age style shelter when one of them, Dave Mill of Fearnan, was taken ill.

Dave, who is ex-military and has led expeditions to the Arctic, informed his colleagues that there was something wrong and the emergency services were called. Literally within minutes, one of Loch Tay’s First Responders was on site followed quickly by an ambulance and the air ambulance.

Within 45 minutes of being taken ill, Dave was on board the helicopter with a suspected heart attack. 8 minutes later he arrived at Dundee and within 2 hours he was in the operating theatre. Less than a week later, Dave is at home with his wife and family after having 2 stents fitted at Nine Wells Hospital!

We are all extremely grateful to everyone, particularly Susan Duncan-Miller, the Loch Tay First Responder, the guys from the ambulance service and the crew from the air ambulance. As usual with emergency teams, we didn’t get their names – but you know who you are so please get in touch as we would like to offer you all a free special visit to the Crannog as a thank you.

Dave called us this morning to say he is feeling fitter than ever despite his ordeal. He even knew the Captain of the helicopter who he had met whilst in the armed forces!

The Centre plans to hold a fund-raiser for the Air Ambulance later in the summer so please look out for details and be sure join us to support this amazing service.