My life as a museum novice – The People You Meet! 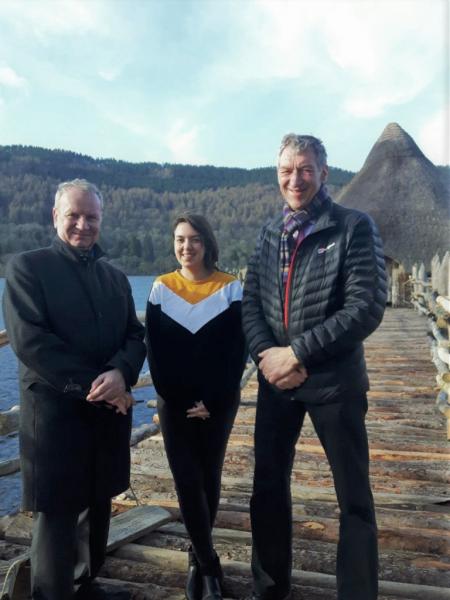 Skills for Success Trainee Ellen talks about the different people who visit the Scottish Crannog Centre.

One of the most interesting aspects I’ve found working at the Crannog Centre so far is the variety of people who come through the door. I’ve worked in tourism before (it’s probably the main industry in Perthshire), but it’s quite refreshing to work in a subculture where people are visiting not only to see the amazing landscapes but also to learn from you! Over the past 9 months, I’ve met an array of people from the USA to Australia to Japan, all interested in different parts of the museum – some love the construction and technology of Iron Age Scotland, others are more interested in the food and clothing made by the crannog dwellers themselves. But what is the one thing the visitors all have in common? They want to learn about the people who lived in the area two-and-a-half thousand years ago and, more often than not, the people who live here now. It’s not just about the dry facts of history and archaeology (although there’s lots of that type of information available if it’s your thing!); it’s about experiencing a fun day out with the family, meeting new people and getting hands-on learning about the Iron Age.

I’ve also got to meet some important people while on placement at the Crannog Centre. In February we were lucky enough to spend the afternoon with Deputy First Minister John Swinney, who was keen to hear about the development of the museum and the vision for the future of the centre. In March, local MP Pete Wishart came for a quick tour to meet the team and get an idea of what the plans for expansion could bring to the area for the community. It’s really great to see such faces onsite taking a real interest in the crannog community and seeing first-hand that the centre is run for the benefit of making the local heritage accessible to all.

Sometimes museums can seem like they are only available to a certain type of person, but I would implore anyone who is interested in people and stories to have a go at visiting – most people start their experience with no knowledge of crannogs and even if they leave with just one new thing they’ve learned, then it’s a job well done!