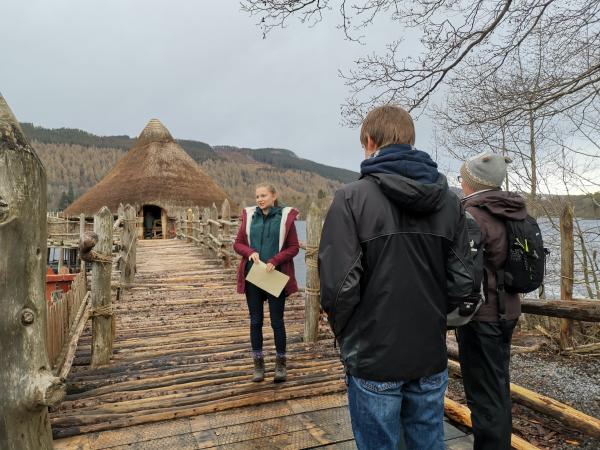 Find out how student Kat got on volunteering at the Crannog Centre in February!

My name is Kat and I was a volunteer at the Scottish Crannog Centre for a week this February. In October I will take up a place at the University of Cambridge to study Classics, so Iron Age Britain is a little early for my expertise! Coming to the Crannog Centre this February I wasn’t quite sure what to expect, but the centre surpassed all the expectations I had. The staff were friendly and welcomed me as a temporary part of their team with open arms and I never felt out of place, as I had on other placements.

In just a week I’ve gone from a pure Classics student (Rome and Greece) to taking tours about Iron Age Scotland! I have not only learnt about the history itself but also how museums like this run. They told me about their plans to move to a larger site of the other side of the Loch, which was an invaluable insight into the real-life concerns of a small museum, trying to get the amazing artefacts they have out to the public. The plans they have are ambitious but not unachievable, providing them with more staff and a building to house the collection that’s fit for purpose. In the meantime, however, they must acquire the funding for this, something very difficult to get. I never realised how much the staff themselves go out and get that funding, as much of it is down to them applying for all the grants they can find. The implementation of a democratic workplace, where everyone has a say is an asset to the centre. There’s very little sense of a hierarchy, making it a much less restrictive workplace for all.

The first day of my visit was a shock, as I realised just how little money there is in archaeology. We made a record of samples that had been kept under the building for years. Not ideal, but better than the warehouse offsite where they had originally been stored. Some of the samples were stored in unusual containers, such as ice cream tubs! A few of these items are the museums most important artefacts, so it is vital that more money goes into protecting our heritage.

Alongside all this, I got to plan an event for myself. Hopefully, sometime this year children will get to create their own Petrospheres, Iron Age stone spheres with an unknown purpose, out of clay and a rock from the shores of Loch Tay, an idea which I came up with and worked on independently. Doing this meant I saw what really goes into these events that, as an 18-year-old, I would have been a part of only a decade ago and just seem to happen as if by magic when you arrive.

The final few days of my placement have been devoted to leading tours. Though I have experience of public speaking, it’s always been on a topic that I had researched extensively, not a topic I had only been introduced to this week! However, it has increased my confidence already and with the guiding hands of the staff, I led my first tour only four days after arriving on Monday.
My experience at the Scottish Crannog Centre is unparalleled by anywhere else I have been. The staff treat me like an adult and give me (a certain degree of) responsibility. I felt entirely included and equal to the amazing people around me, though I myself have barely started my degree. I have thoroughly enjoyed that week and I can’t wait to return in the summer!