Hyab Yohannes (UNESCO) – “A trip to a Crannog” 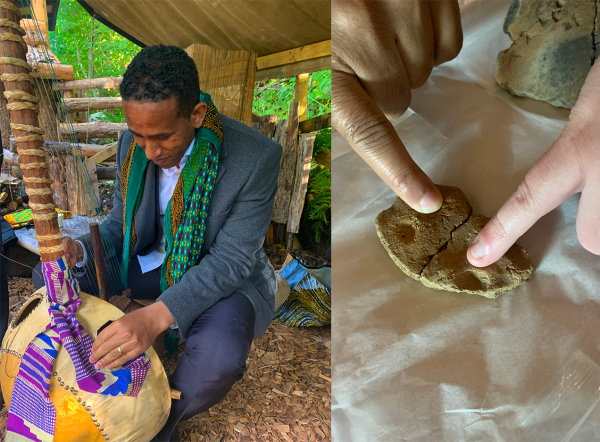 A few days ago, I had the honour of visiting the Scottish Crannog Centre, having been invited by the UNESCO Chair at the University of Glasgow. The Scottish Crannog Centre is a community centre at the heart of a small village on Loch Tay. The centre volunteers told me that the Crannog was a much-loved part of the local community before it burnt to ashes in June this year. The burning of the Crannog has been devastating for the community. From conversations with locals and volunteers, one can easily understand the strength of the local community’s rootedness to the place.

Leaving the local history and geography to those who know it very well, I want to focus on my personal reflections of the trip to this little-known place in the UK. Upon our arrival, we were greeted, offered a hot drink and guided to a beautiful wooden house made of local materials. Inside, we met locals and volunteers, who welcomed us to join them around the fire. In the chilly weather, in the warmth of the fire, surrounded by the beautiful scenery surrounding the Crannog, it did not take us long to relate agreeably to these hospitable people.
Shortly afterwards, the volunteers took us on a trip across time through the history of the place, introducing us to the thread that connects the pre-colonial way of life of the people who lived in the Crannog with the local communities. Listening to them, I learned that the Crannog could be a place where new possibilities for infinite plurality can readily be imagined outside the colonial constellations of the world order, as I will come to below.

While we were exploring the area and listening to the stories of the residents, The Scottish Government Minister for Culture, Europe and International Development, Jenny Gilruth and the local constituency MSP and Deputy First Minister, John Swinney arrived for a Ministerial visit and were shown around the centre. After everyone voiced their concerns and articulated their visions for the place, we exchanged warm thank you messages and took selfies with the government ministers. We then left, a short while after another round of warm goodbyes.
The visit to the Crannog left me with various questions and imaginings. Throughout the day, I asked myself, what would it look like to build a university of grandparents there for them, through their oral stories, to remind us of what we have forgotten? What would it look like to build a university of ancestors at the Crannog for our ancestors to teach us, through their textiles and artefacts, what we have lost? I imagined creating a university of the oppressed to teach us how to be free. I imagined a university of artists to teach us how to reconnect with our ancestors through music, art and culture.
Then, as a way of answering my own questions, I started to think that the Crannog already possesses everything I imagined. Indeed, it is a natural ‘pluriversity’ – a space of knowledge production that resists the ‘university’ from being ‘universal(ly Western) into being inclusive and plural’ 1. It’s a place where memory and the future intersect, where the individual meets the ancestral and where humanity intersects with the environment in myriad ways. The archaeological excavations enable us to remember what we have forgotten. Through the stories told by the ancestors’ textile use, we begin to learn again what we have lost. The Crannog also offers a space for reflection and unlearning the colonialities of the present and the future.
From this perspective, the Crannog Centre is an alternative space to the ‘university’ and the ‘modern city’. There seems to be no point in sitting in an office in a prestigious university – whose institutional history leads back to slavery – not to question its colonial roots and re-imagine its present and future. Nor could there be any point to living in a metropolis marked by statues of former slave owners if not to uncover the stories of those who are buried underneath – the slaves. As a space wherein humanity presents itself with all its multiplicities, pluralities, corporealities and temporalities, the Crannog allows us to ask these questions. And in so doing, it symbolises the birth of a decolonial world, where multiple worlds converge in axes of hospitality.
Having spent time there, even only a day, I witnessed human-to-human connectedness through timeless rituals, music and textiles. By placing my fingers onto the fingerprints of the precolonial ancestor I felt like I was an ‘exile’ to a decolonial space where the binary paradigm of ‘us vs. them’ and the duality of the oppressor and the oppressed disappear permanently. Indeed, exile into the Crannog symbolises a redemption from the sins of coloniality and capitalism. Yet this birth of a decolonised space in a little-known village in rural Scotland is a birth that is neither celebrated nor articulated. This is why the centre is so determined to articulate the richness of the fertility and decoloniality of the place so that it becomes “a national treasure loved by all, with social justice at its heart”.

As a recent visitor, I can testify that the centre needs adequate support in terms of resources and knowledge to sustain its work. If appropriate resources and knowledge are provided, then the work of the centre would involve dismantling the frames, shapes, orders and institutions of coloniality without losing any content. The centre needs all its content – bad and good – so that it can put it into new frameworks, new laws and a new order. Unlike the university and city, the centre’s vision is to use its past and present content to build bridges instead of erecting borders, create memories instead of promoting forgetting and foster conviviality instead of supporting the competition.

Finally, I want to finish my reflection on a subject that is close to my heart and way of life: “restorative integration”. Restorative integration is a decolonial process of re-building the unfinished project of humanity that was interrupted by colonisation and coloniality. The Crannog and loch Tay present to us traces of this interrupted project of humanity through the carefully preserved pre-colonial artefacts and footprints. The excavations (e.g., the fingerprints and artefacts) of the Crannog embody the point of interruption of the ‘human’ without identity and labels. The work of restorative integration—the restoration of the primacy of the ‘human’, not only of the citizen, and the preservation of the right to have equal rights—must begin at this point of interruption. As a former refugee myself, I found the crux of the restorative integration in the touch of the fingerprints of the ancestor. It gave me a kernel of hope for a non-exclusive humanity in which we all belong to each other.