From Seed to Plant to Colour 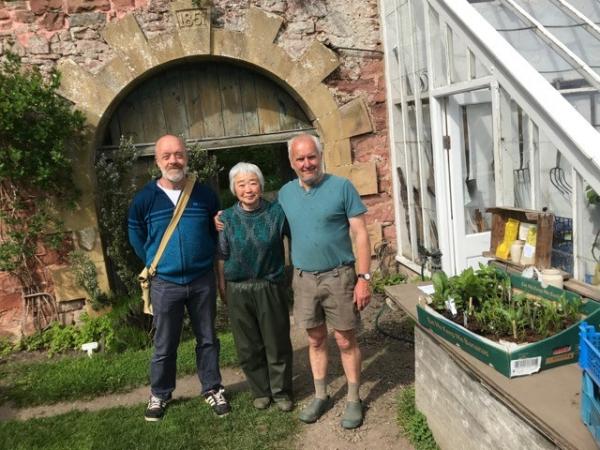 Textile Interpreter Jason talks about this experience this past year learning about dyeing plants in Iron Age Scotland.

This year in the textile area we had two main goals – producing colour from plants and setting up our loom in order to practice ancient weaving techniques (more about the latter in a later blog). Early on in the year, I visited Poyntzfield Nursery on the Black Isle, to learn about some more unusual plants, which have medicinal, culinary and colour-based properties. In the textile area at the Crannog Centre, I speak with people about historical colour and how it is made, but plants like madder, woad and weld are not ones that, generally, people have heard of. So in the early part of the year, we planted a garden at the front of the Centre, with guidance from our friends at Poyntzfield. Here at the Crannog Centre, one of our aspirations is to be a self-sufficient as possible, so a new garden is one step nearer to that goal.

In the archaeobotanical report from the Oakbank Crannog excavation site, the only plant that is specifically for creating natural dyes is dog’s mercury (Mercurialis perennis); a herbaceous perennial that forms dense, extensive carpets beneath hedgerows and in woodland sites from which a blue colour can be extracted. It has the curious quality of emitting the smell of rotting fish! On ingestion, there is apparently some narcotic effect, such as drowsiness and possible muscle spasms – not really ideal as a medicinal plant, so this was the first plant to be put in the dyeing garden. Meadowsweet (Filipendula ulmaria) was also found at the Crannog site, so we also included this in the garden. We have alder (Alnus glutinosa) at the Crannog Centre, which was also found at the site of the excavation, which can be used to dye, as it has a high concentration of tannins. Other plants that were included in the garden for dyeing, that have been used historically and more recently in Scotland are weld (yellow), woad (blue), madder (brick red/orange) and ladies bedstraw (yellow/green). These were inspired by our invitation to visit the Royal Botanic Gardens last year, to learn about the different dyeing plants. We planted these as a continuation of the dyeing tradition and will be using them to make a variety of colours in the coming year. Clubmoss (Lycopodiopsida) is also growing, as it accumulates alum, which can be used as a mordant (fix) in the dyeing process.

The front garden needed to be stripped back, cleared and levelled, so one of the interpreters, John, and the site manager Dickie, helped with the heavy work to clear the area. The ground was then turned over and a dressing applied to help the plants grow. Our plucky volunteer Will Kent and I then set to work organising the plants, to see where they would grow best. Will suggested that we divide the plants into areas as we also had mugwort, wild strawberry, sorrel, valerian, cowberry and burdock, amongst others; all found at the site of the Crannog. The areas are – dyeing plants, plants found at the excavation and fruit-bearing plants. We completed the garden over the course of two weeks and despite the number of rocks we had to clear as part of the process, we are pleased with the initial look of the garden. Of course, it will take a while to establish, so we look forward to the fruits of our labour in the coming years. Many thanks to Poyntzfield Nursery for their guidance and inspiration through this process!’