Being a Community Archaeologist – Rich Hiden 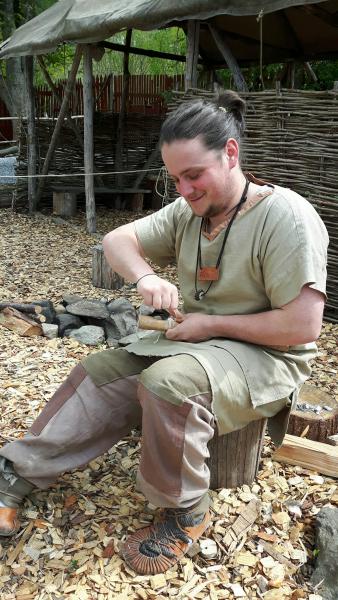 A lot has changed at the Crannog Centre over the last 12 months: we spent our first year as a nationally accredited museum expanding what we deliver on a day to day basis and are now starting the renovations of our museum space. We aim to create a new immersive setting that enables us to showcase the fantastic collection of 2500-year-old artefacts in our care.

A part of this approach and to embrace our new status as a museum, we were kindly granted funding from the SSE Griffin Wind Farm Fund to support one of two community archaeologist positions.

The job of a community archaeologist is to engage the public with our fantastic collection of artefacts and to do justice to the Iron Age people who left the objects behind. Our aim is to understand the communities of the past by building a community in the present!

Over the past two months, we have been focusing on building meaningful relationships with local schools. Although the Centre has been involved with schools in the past, we are now building more involved partnerships tailored to and around the school’s particular needs. This will help deepen and strengthen our relationship with them in order to create a valuable experience which can be shared throughout the whole community. This has also involved creating service level agreements with the schools.

The process has engaged students at both Breadalbane Academy and Pitlochry High School through apprenticeship drives and attending work experience fairs at Edinburgh University. We also attended the Archaeology Fieldwork Fair where we began to develop a relationship with the Edinburgh Archaeology Outreach Programme which resulted in my attendance at one of their outreach days with a further one scheduled for March.

Many teachers do not realise that there is a national museum located on their doorstep which can be used for more than a one-off school trip. The centre is also an important venue for community events.

Our work with Grandtully School is a good example of this: Grandtully had not visited the Centre during my 4 years here so we were eager to engage the children. We, therefore, aimed to draw them into an exciting project based around an artefact in our collection; a bridge from a musical stringed instrument believed to be a Lyre, dating back some 2500 years. This object has been described by experts as “of national significance” stating that it deserves further research and development. As a result, we recently received funding from the Heritage Lottery Fund for that very purpose.

I attended the school to talk about the objects in our collection and in particular, the bridge. We wanted the children to think about what a lyre might have been used for, who played it and how we can connect to the people of the past through music in the Crannog. Consequently, the children visited the Crannog for our Celtic Yule event in December where they gathered around the fire inside the Iron Age building and sang carols and Christmas songs to fill the Crannog with music once more. It was a meaningful and special experience.

Other highlights of the role so far have been the development of relationships with Breadalbane School and Library. We enjoyed attending their free library community day, as well as helping deliver two of their reminiscent group sessions ‘Tea and Tales’ for a small group of older members of the community. Breadalbane Academy has also played a significant role in our year: they set up a school café at the Crannog and came to visit as part of the school’s history curriculum, for which their history teacher Isobel Wilde and I worked hard to make sure that we were hitting school targets but in new ways. We plan to continue building a close relationship with Breadalbane school during the course of the year.

Children play an incredibly important role in the future of heritage and history and opportunities should not be restricted to the school timetable. With this in mind, I started the Loch Tay Young Archaeologists Club in February 2018. Although less than a year old some of the young members recently presented their work to the Breadalbane Heritage Society and at the Tayside and Fife Archaeological Committee Conference 2018. The children have been engaged with archaeology and history by recording the headstones at Kenmore Churchyard. We have also explored what archaeology is, how to find it both on and above the ground including a visit from a local photographer with his drone. The children often take part in running events at the Crannog, working with museum staff and volunteers, building their confidence and team working skills. This has the knock-on effect of being a rewarding experience for everyone involved.

My next step is to take the young archaeologist club into schools to drive more support, including an archaeological session on Mayan archaeology at Kenmore School. I have also agreed to run a block of ‘genius hour’ sessions at Grandtully school with a view to inspiring more kids to look at archaeology as an important part of understanding our heritage.

Since October we have been working hard to increase our volunteer presence at the Crannog and now have an average of around 12 regular volunteers. Volunteers are all ages and abilities and it’s great to see that people are embracing our new identity as a museum that welcomes everyone!

This can also be corroborated by the many skilled crafters who have been involved with us this year and have travelled from as far away as Devon in one instance to be part of the Crannog Community. From salmon-skin bag-making and birch-wood spoon-carving to Pictish stone-carving, the display of period relevant skills and crafts has been paramount to our events and is helping lead us to a better understanding of the people of the past.

One of our young volunteers, William Kent, who is gradually suffering the loss of his eyesight, has gone one step further from volunteering and is now returning regularly as part of his EPQ programme. He is researching and creating a piece of Iron Age clothing and has made his own drop-spindle to spin the wool and will ultimately be weaving the fabric himself too. I have also put William in contact with textile experts to assist him with his project. It takes William a lot of time and patience, as he is learning all these skills through touch, but is an amazing project. William is an inspirational young man and I have loved every second of working with him.

The position as Community Archaeologist has meant that I have been able to develop closer relationships with the local community on behalf of the Crannog to involve local people in what we are doing and to value their input. In addition, I have been supporting people of all ages and abilities in new roles and new adventures assisting in their learning and embracing new skills. We have come so far in a short amount of time and I’m looking forward to seeing what the remainder of my year as Community Archaeologist brings.

Again, I would like to extend my thanks to SSE for funding this position and allowing us to engage our local community, develop better relationships and take responsibility for our social obligations as a national museum that matters.