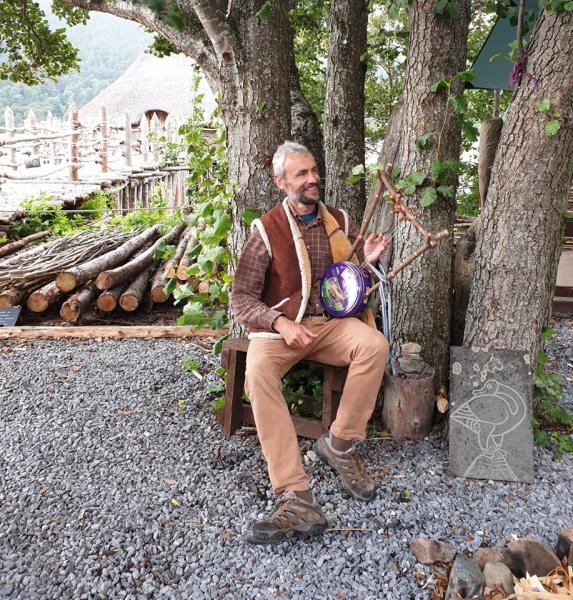 Thanks to funding from the National Lottery Heritage Fund, the Crannog Centre was able to procure the expertise of Barnaby Brown, an internationally renowned musical expert who specialises in prehistoric instruments, for a week-long residency.

At the beginning of his residency in the first week of September, Barnaby spent 3 days working with the children of Kenmore Primary School, building replica 7-string lyres from hazel and old biscuit tins with the P5-7 class. The younger pupils at the school were taught the oldest known Greek song, which they then performed for parents and teachers, accompanied by the older pupils and some of the newly built lyres.

Aberfeldy Ukulele Band were able to spend a full day with Barnaby later in the week, also getting the chance to build lyres out of the odd materials provided. Once the group had finished their instruments, they were able to give a first-time performance to visitors in the crannog. Susan Bowden, a member of the band said, “What a great day. Barnaby Brown was excellent… a thoroughly interesting day and everyone had a fabulous time”.

Barnaby’s residency concluded with two special evening performances in the crannog, for both staff and community members and trustees. These intimate concerts featured lessons in ancient songs, plus performances by Barnaby using reconstructed ancient instruments – including a vulture radius pipe (dated 38,000BCE) and a deer tibia double-pipe (dated 480BCE). It was a unique experience enjoyed by everyone who attended.

The Scottish Crannog Centre would like to extend a huge thank you to Barnaby Brown, whose knowledge and enthusiasm made the lyre building project a massive success.

To find out more information on Barnaby Brown, please follow the link: barnabybrown.info/