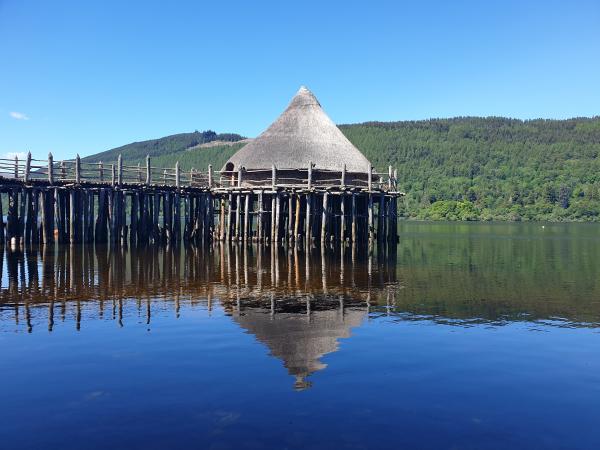 It is with a very heavy heart that the Scottish Crannog Centre Trust has to report the devastating news that the iconic reconstruction of an Iron Age Crannog was destroyed by fire.

We are now even more determined to double-down on all our efforts in the development of the new Crannog Centre already in planning on the north shore of the loch at Dalerb. Later today we will launch a Financial Appeal for all those to whom the Crannog has meant so much in the past and whom we know will wish to contribute to the renewal of this unique part of Scottish history. We will continue delivering the magic, and we believe that the best way to do so is to fast track our development plans to move. We plan to build a new museum, fit to hold the artefacts left in our care, the most sustainable in Scotland, that will allow us to grow the way we work, and to be a place of learning and leading, alongside three Crannogs, an Iron Age village, a woodsmans yard, artist hubs and workshops, performance spaces, a caf and gift shop.
Visit our JustGiving Page

The Scottish Crannog Centre Trust (formally known as the Scottish Trust for Underwater Archaeology or STUA) set out to build an authentic recreation, or ‘reconstruction’, of an Early Iron Age crannog based directly on their research and underwater excavations at Oakbank Crannog in Loch Tay. The aims of this experimental project were not only to answer specific questions and to rediscover ancient technology but also to provide a living educational resource and heritage visitor attraction.

As with most archaeological reconstructions ‘open’ to the public, compromises needed to be made based on the requirements of modern planning controls and building regulations which relate to issues of public safety. Such dictates included emergency lighting and reducing the distance from the shore, but they did not affect the structure of the Crannog itself.

Elements of our project can be considered as ‘experimental archaeology’. Of particular interest is the use of traditional materials and the way they stand up to the conditions in the loch, particularly high waves and wind in excess of 100 miles per hour.

The preparation and building began in 1994 and was completed in 1996. The last section of the walkway was completed in 1997 when the Crannog was opened to the public. From the outset, we had to experiment to learn how to drive the 7 – 9 metre long timber piles by hand into the lochbed in several metres of water. We also had to learn how to wield heavy bracing timbers for the foundation framework that supported the house platform. While modern tools were used mainly for tree-felling and shaping the wood, experiments with replica ancient tools ran in conjunction which demonstrated all too clearly how much effort would have been expended by the crannog builders 2,500 years ago.

Although the modern tools made it easier for the builders, the materials used were more accessible locally in the past as the people were certainly involved in coppicing and woodland management to ensure a supply of good straight timbers for piles and uprights and thin hazel for making hurdles.

While all of the details of the crannog reconstruction do not, and cannot, match exactly the discoveries from Oakbank Crannog, the building is intended to be as authentic as possible. The floors and wall uprights are accurate representations and the roof merges common sense with the results of many other researchers’ work in building roundhouses. Many of the details of life on the crannog are very accurately portrayed.

Continue below for more notes on the Crannog’s structure.

Foundation: The timbers that supported Oakbank Crannog were primarily alder, oak and elm. Accordingly, while elm was not available we used alder and oak in the reconstruction with the distribution of piles similar to the main part of Oakbank.

Floor: The floor is the part of the reconstruction that is most easily compared to the original site. Excavations at Oakbank revealed many small alder trees lying parallel to each other to form the floor. In the reconstruction they are lashed or pegged to the underlying foundation structure.

House walls: The walls and partitions in prehistoric houses were often constructed of wattle hurdles made of hazel. Hazel rods were discovered at Oakbank Crannog as single rods in a bundle and woven into hurdles associated with a structural timber. Based on this evidence, hurdles are used in the reconstruction for partition walls and the outer walls of the house.

Roof: No direct evidence of a roof was found at Oakbank Crannog. A long timber was discovered lying away from the main site which may have been a rafter, but this was inconclusive. Trial and error in roundhouse building provided guidelines for what works and what does not. The angle of slope of a thatched roof is very important. The deciding factor is the ability of the roof covering to prevent rain from penetrating and snow from lying. If rain gets into the thatch it can rot it from the inside and if snow lies on the roof the weight can eventually cause it to collapse. A strong ring-beam at the head of the wall supports the bottom of the roof-poles and an upper ring-beam supports them at a higher level.

To support the thatch of our crannog, strong hazel purlins were tied and notched into the roofpoles. While modern rope was used to secure them to comply with regulations, examples of straw, hazel and other natural fibre ropes were found at Oakbank.

Thatching: The most important element of the roof and possibly the whole structure is the thatched covering. This is what protects the crannog, as well as the inhabitants who lived there, from the harsh Scottish weather. The thatching of the reconstruction was the only part of the structure where specialist help was required. In every other case volunteer labour was used.

Based on the abundant plant finds at Oakbank Crannog, it is possible that bracken, rushes and/or straw was used to thatch the original house. In another compromise based on financial and practical constraints, we chose to use reeds from the nearby River Tay. Each bundle was tied on and the top was secured with hazel spars twisted like staples.

Living areas: Evidence from Oakbank Crannog shows that there was a special place for animals, apparently just inside the door to the right. They would have been part of the living food supply for winter as well as breeding stock. They also would have helped to keep the place warm and would be protected through the harshest part of the year.

SCCT’s underwater excavations did not reveal any recognisable furniture or bedding, so the reconstruction layout is based primarily on common sense. The house almost naturally divides up into functional areas by placing easily moved hurdles into the appropriate place producing a very open-plan dwelling. Sleeping compartments were probably made particularly warm and cosy and may have had internal roofs for extra insulation as well as storage. It is likely that in preparation for winter all sorts of foodstuffs and agricultural supplies for the next season would be stored. Fish and meat may also have preserved by smoking and drying and then hung around the upper ring beam. The crannog-dwellers may also have had additional structures and shelters on the shore.

Hearth: Although no in-situ hearth was discovered at Oakbank Crannog, several stones and volumes of tipped ash have been found and further excavation may reveal at least one hearth at a lower level. However there is evidence that the central area was surrounded by a small partition wall, probably made of hazel hurdles stuffed with moss or hung with skins, which would have helped to keep out drafts.

In the centre of the reconstruction, the hearth is made of stones on a base of clay covering the floor timbers. The stones around the fire stop the hot ashes from falling onto the bracken-covered wooden floor. The clay base prevents the heat from setting the floor underneath on fire. The fire provides light as well as warmth to heat the house in winter and summer when, because of the thick roof thatching, the house is not warmed by the sun.

There is no smoke-hole in the roof. A hole would allow snow and rain to get into the heart of the thatch and rot it from the inside. Experiments with fires in the reconstruction show that there is no significant build-up of smoke even after many hours, partly because the roof is so high and partly because the smoke permeates the thatch.

Our reconstruction is a tribute to the skills and ingenuity of our Early Iron Age ancestors. Visit the Scottish Crannog Centre to experience this in person!