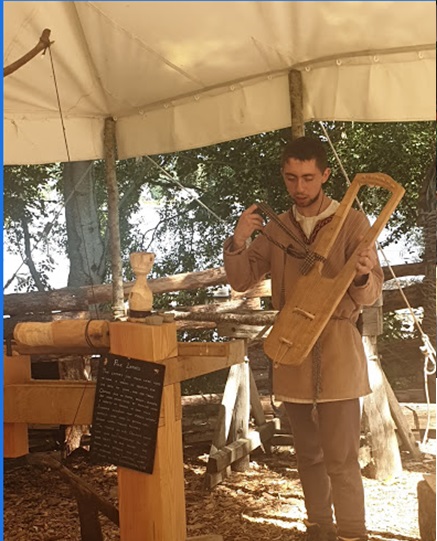 My name is Will, the Blind Bard. I am one of the five apprentices at the Scottish Crannog Centre, and we are currently working through our second apprenticeship course. I enjoy walking, paddle boarding and many other outdoor activities. I also spend my time learning about history of all kinds and writing poetry and stories. I have been able to use these poems throughout my time at the Crannog, adapting them for tours and linking them in with the lyre bridge found on the original oak bank Crannog. Recently I have also started to record these and am planning to gradually release these on my YouTube channel, Sword of the sightless, along with later historical content.

I first visited the Crannog Centre several years ago, almost by accident. My Father and I went in not knowing what to expect. By the end of the tour, we had become fascinated with the topic and shortly after I became a volunteer. The Crannog community was incredible. On my first day I met a large portion of the team and was quickly welcomed in. During these years I learnt many useful skills, such as tablet weaving and a small amount of woodwork. It was also during this time I performed my first tour. Having been told there would only be three people on this first talk, I was shocked when the Crannog’s walkway creaked beneath the feet of not three but thirty visitors.
After spending a year in Hereford at the Royal Blind School there. When covid struck, I returned north and soon heard about the coming apprenticeship. Having enjoyed my time at the Crannog greatly, I signed up as quickly as I could. A great decision, which allowed for an even greater opportunity.

I have gotten a lot out of the apprenticeship scheme. It has allowed my confidence to grow greatly, going from fearing to talk to small groups to now speaking to hundreds of people at a museum’s gallery Scotland presentation. Having before believed this talk would be terrifying, I was pleasantly surprised to find it a rather enjoyable experience. During my time at the Crannog, I have also been given the opportunity to write several tours. These centered mostly around important events in the year such as Yule (modern day Christmas).
This involved researching the necessary topics and then trying to connect reoccurring themes with the museum’s collection, before bringing it all together and memorizing the new content.

Another great opportunity is that of adapting the museum for people of all need. Due to my journey from sighted to blindness, I have gradually found museums more difficult to access. To try and change this we are starting a new project to try and improve this aspect of the sector, starting with the Crannog in its move to Dalerb, but hopefully expanding and influencing the wider sector. These adaptations wouldn’t just be for the blind and partially sighted but will aim to aid any who would normally struggle in the museum environment. This is an opportunity I am looking forward to greatly, to work on alongside the team, and one I believe will yield great results.
Another incredible opportunity that has recently arisen is that of radio work with RNIB. Following an interview last year and a later follow up one, I have now been asked to help them on a radio project focusing on objects from history.

The Crannog is an amazing place and a very unique environment. This often means that many occurrences here cannot be experienced in any other place.
There have been many great and interesting moments in the past year, during and between tours.
One of my favorites was on a textile talk working with some visitors. I was teaching them how to drop spin to make yarn and I gave them each a go in turn. The first two kids enjoyed their attempts and so I passed it on to the third. To my puzzlement everyone in the group burst out laughing. I had no idea what they found so funny, until one man explained that his third child… was not a child, but a large dog in a waterproof coat!
On another occasion I decided it would be good to bring out the carnix (an ancient Celtic trumpet) and try to play it for a small group. This did not go well and after I had emitted a sound I can only compare to a night after a strong curry, all on the tour had collapsed in laughter. Somehow my failure had been a success, as still by the end, the kids on that tour told me it was the best part of their day.

It’s not just within tours that such moments occur. Between tours and working on parts of the apprenticeship, there is often time to work on projects and prepare for upcoming events. It is usually during this time that the most humorous things occur. For example, after giving a tour and taking a group out onto the water in log boats, I was left alone to tie up the unwieldly craft. Onlookers were all amused by the sight, as a blind boy rushed up and down the log boat with a single paddle. Slowly positioning the large boat and trying to avoid taking an unwelcome dip in the chilly waters below. Even though the waves were against me this was eventually achieved, and I remember it fondly as one of the most fun moments at the Crannog.

Another example stays by the loch shore, as one of my favorite memories. It was when we all first tried to use the corical. This round boat is not an easy vessel to sit in let alone move. Somehow though we all managed to stay in it… for the most part. But there was still a lot of laughter and more than one unwelcome dip.
It was not just within the Crannog itself that such memories have been created within our community. During the lock down of covid we continually stayed in contact via zoom, preparing for the coming year. After a few of these it was decided that we would all learn sign langue. For this I admit I was rather skeptical as the blind are not well known for their grasp of fully visual concepts. Still, we persisted. I will never forget the moments where everyone tried working together to explain (to varying degrees of success) the intricate motions required for this visual language.

My last example is, after the last few rather chaotic humorous events, a little more peaceful. Simply drifting out onto the water in a log boat as a group. Enjoying the clear waters of summer. This is the calmest memory of the Crannog. At least it would have been if we had all kept our balance.
In conclusion the apprenticeship scheme has so far been an incredible experience. It has helped me to grow in confidence and as a person. But best of all, it has been a great opportunity. Working alongside experts in many fields has helped me to gain a larger skill set and increase my understanding of many more topics. It has also been a good opportunity to put my work and ideas forward. First with poetry and stories, and now being able to adapt the museum for a wider audience. This has been an unforgettable experience and one I highly recommend to any considering this route. I have so far worked for five years with the Scottish Crannog Centre and am looking forward to continuing this in coming years.